[email protected]Thanks to an outcry from many thousands of citizens outraged by the Trump administration’s “zero tolerance” policy mandating the prosecution of all illegal immigrants and asylum seekers and the separation of the children from their parents, the president was compelled to sign an executive order ending the separate detention of the children. But the fight is far from over. Although about 500 children have been reunited with their families, new and disturbing information continues to emerge: detainees desperate to find their children being essentially compelled to plead guilty to illegal entry even though some have a credible basis for asylum, parents deported without their children, children scattered in foster homes throughout the country, parents and children processed in separate systems with no procedure for matching parents to children. Immigration officials have announced plans to detain as many as 15,000 individuals, while the Justice Department has requested judicial clearance to detain children for longer than allowed by current law and in unlicensed facilities. The situation is fluid, changing from one day to the next and from (un)presidential tweet to (un)presidential tweet, but it’s clear that, as with the Dreamers, Trump sees immigrant children as bargaining chips in his bid to build the “big beautiful wall” with which he hopes to appease his base. And he’s urged Republicans to do nothing until the “red wave” in November that will allow them to pass “great legislation.” Now, more than ever, we have to work to get Democrats elected, from the most local of offices to the state legislature to the US House and Senate. The lives of immigrant children—and the soul of our nation—hang in the balance.

***CANDIDATE INFO! ***
Look to this section each week to find current information about DWC candidates.

Shelli Yoder, candidate for Monroe County Council District 1, will have a G4G (Gearing Up for the General!) Meeting TODAY, Monday, June 25 from 5:15 to 6:15 pm at Inkwell. Please RSVP to [email protected]

Penny Githens, Candidate for State Representative District 60, needs people to accompany her to events. Remember she has Morgan and Monroe counties as part of her crazy gerrymandered district. Please email her volunteer coordinator to participate in a genius of a way to sign up! [email protected]

Lee Jones, candidate for Monroe County Commissioner, needs volunteers to march with her in the 4th of July Parade. She also needs people to represent her at the Monroe County Fair. If you are willing and able to help her, please e-mail her at [email protected]. Be sure to tell her what size t-shirt you wear.

Nicole Browne, candidate for Monroe County Clerk of Courts, will have a fundraiser on Saturday, July 14. See Events section for full details.

Opportunity to serve as a Precinct Committee Person.
PCs represent the Democratic Party in their neighborhoods, and work to get out the vote for all Democratic candidates, support the efforts of the local party and also have a say in caucus meetings to fill vacancies in elected offices. If you are interested, contact the man with the power to appoint you, Chairman Mark Fraley at [email protected]

The Monroe County Democratic Party will hold a Caucus on Monday, June 25 to fill open vacancies on the 2018 General Election Ballot. If you have an interest in one of these vacancies, please contact Chairman Mark Fraley at [email protected]. The deadline for the party to fill ballot vacancies is noon on June 30. 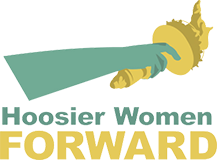 Democratic women across the state who are interested in public policy, political advocacy, and moving Indiana forward with progressive policies and ideas are invited to apply for the HWF program. They need women who are deeply interested in, and can commit to, a nine-month program focusing on study, field experience, and political leadership training. They’re not just looking for Hoosier women who want to run for public office but women who are interested in gaining the skills needed to hold leadership roles in their communities that will effect positive change—from campaign manager, to school board, to head of a nonprofit, to state and federal office. Between 20 and 25 Hoosier women will be selected for the inaugural class.
Information and application are here: http://hoosierwomenforward.org/apply/

The deadline for this year's class has passed but if you are interested in running for office, this statewide training program might be your ticket next year. Information at: http://emergingleadersproject.org/

City of Bloomington Citizen's Academy
Program held on Thursdays from the end of August through October. They guarantee that every single person will learn something they never knew about the City of Bloomington government. An essential if you are thinking of running for a city office in 2019. Applications for 2018 class are open through July 9, 2018. Info here: https://bloomington.in.gov/citizens-academy.

The MCDP is looking for anyone that could help them borrow golf carts for the Fourth of July parade. If you have access to a golf cart, plea contact Executive Director Kaisa Goodman: [email protected].

For more information and to RSVP, please see the Facebook event announcement.

Can't make it to Indy? You can still make your voice heard!

For further information and to RSVP, please see the Facebook event announcement. 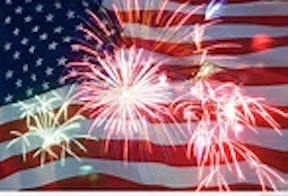 Downtown Fireworks!
Tuesday evening, July 3rd
They’re bringing the celebration downtown and it should be exciting and fun!
Fourth Of July Parade
Wednesday, July 4, 2018 10:00am
9 a.m. Bloomington Community Band plays on the Monroe County Courthouse lawn
10 a.m. Fourth of July Parade begins
11:15 a.m. Parade Awards announced at the reviewing stand, downtown on Kirkwood Avenue
Parade Route: The parade begins at the corner of Seventh Street and Indiana Avenue, marches west to Walnut Street, north to Eighth Street, west to College Avenue, south to Kirkwood Avenue, east on Kirkwood Avenue, and ends at Indiana Avenue.
The Monroe County Democratic Party, the League of Women Voters, DFMC and many individual candidates will all have a presence in the parade… so find a group you’d like to march with and show Bloomington some democratic pride!

Get Down With Clerk Browne Fundraiser Event
Saturday, July 14, 2018,
11:00am-3:00pm
6415 E. Wellston Drive, Bloomington 47408 (home of Tree Martin)
Rain or shine, get down with Clerk Browne and DJ Thomas Marshalek.
A raffle drawing will be held at about 2:45 pm - all proceeds will go
to the Committee to Elect Nicole Browne. You must be present to win.
RSVP [email protected].

Support Senator Dianne Feinstein’s SB 3036 the “Keep Families Together Act”
Oppose the FAKE GOP “Compromise” which would not.
Watch legislation in the House. Rep. Goodlatte's hard-line bill failed (no thanks to Tennessee Trey, who voted "yea"). As of the time the MMN went to press, the GOP had announced plans to vote on another bill in the coming week.

3. Want to do more? Read this article in Slate with helpful resources on organizations fighting to keep families together.

4. Read "Locking Up Family Values, Again," a 2014 report jointly authored by Lutheran Immigration and Refugee Service and the Women's Refugee Commission, that argues forcefully that "family detention" cannot be carried out humanely and calls on the government to implement cost-effective alternatives to detention that have been proven successful in ensuring that participants appear for scheduled court hearings.

Join the DWC or renew your membership today.
The DWC is dedicated to inspiring, recruiting, training, supporting and funding women to increase the number of progressive, pro-choice women in the political arena. We ALL help with this mission, together, collectively. Make sure you have full rights and privileges of membership.
Only $20 for one year’s membership.
Join online here: https://democraticwomenscaucus.nationbuilder.com/membership