DWC Hosted Informative Candidate Forum for City Council At-Large SeatThe DWC hosted the final pre-caucus forum for candidates seeking the City Council at-large seat vacated by Tim Mayer. It took place yesterday afternoon, Sunday, August 13th at the Democratic Headquarters. The event was emceed by Julie Thomas, and moderators included City Council member Isabel Piedmont-Smith, former City Council member Charlotte Zietlow, and County Council member Lee Jones.Candidates Jean Capler, Sierra Reed, Gabe Coleman, Jim Sims, Darryl Neher (via Skype), Sean Starowitz, and Trent Deckard were all there to provide two minute opening and closing statements and answer questions, including a lightning round with only one word answers allowed! The crowd in attendance was diverse and everyone appreciated one last chance to get to know the people who hope to be our newest local public servant. Pictures below!If you weren't able to attend, the event was live streamed and archived by the Monroe County Democratic Party on their website and Facebook pages (as are the previous pre-caucus events). 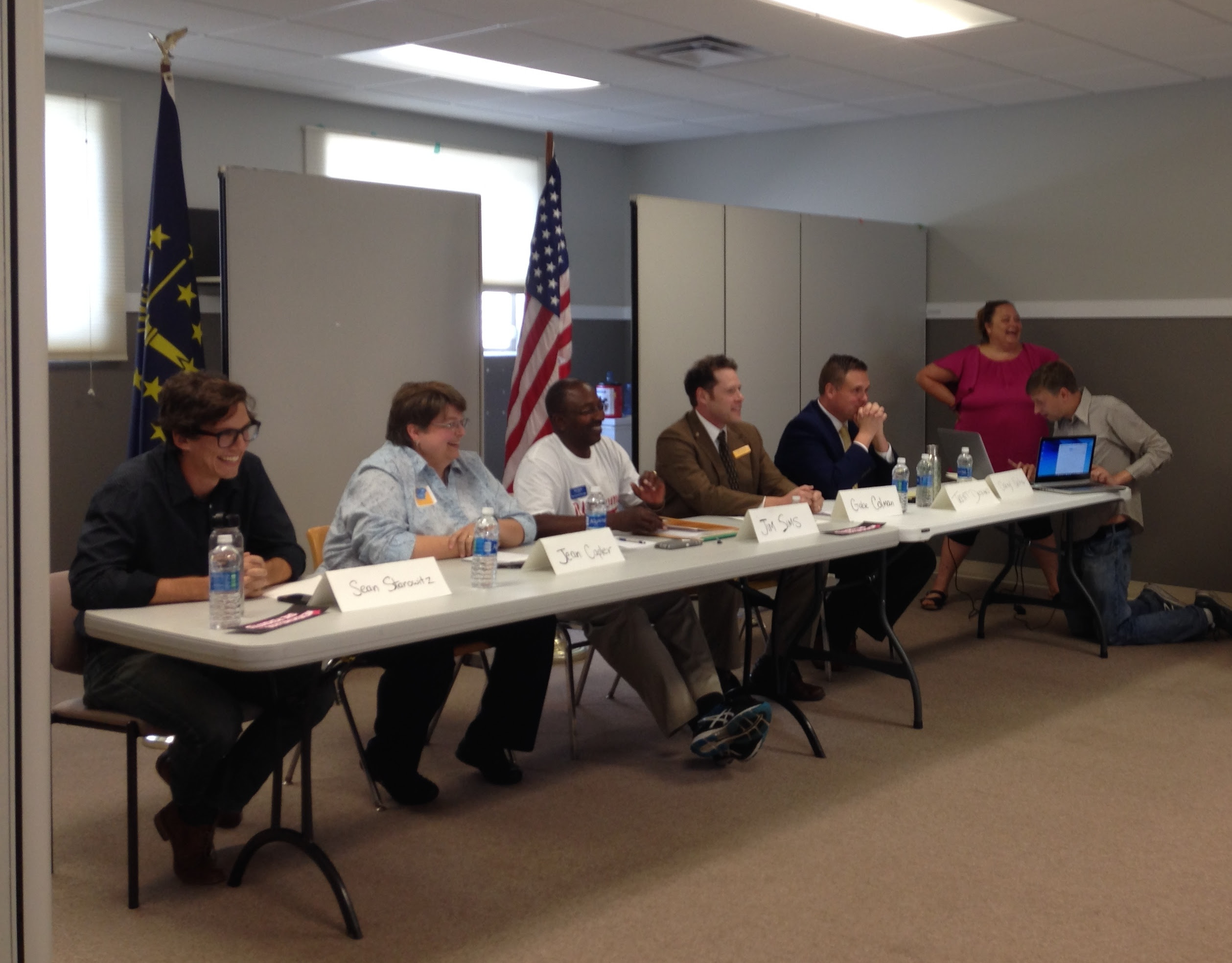 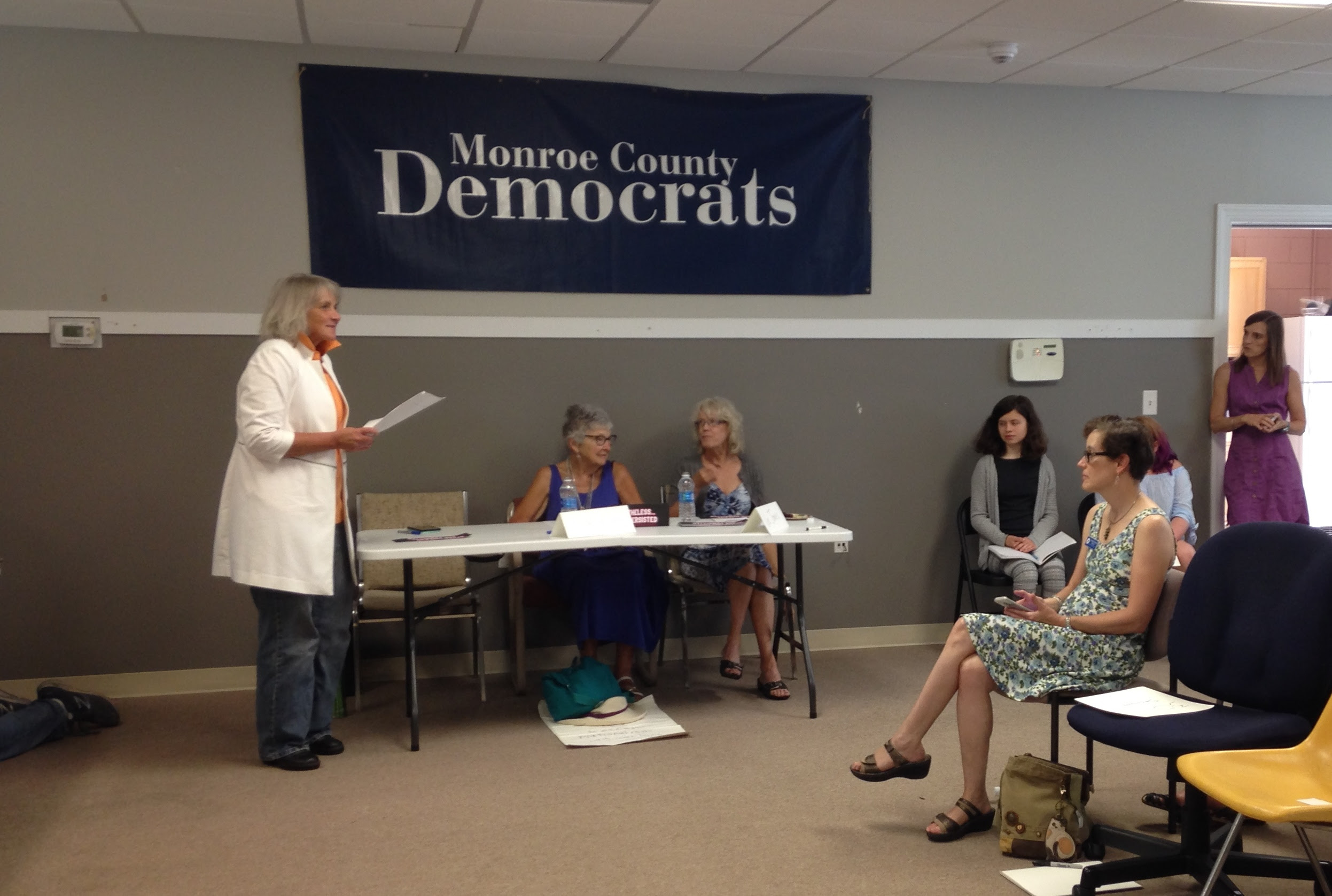 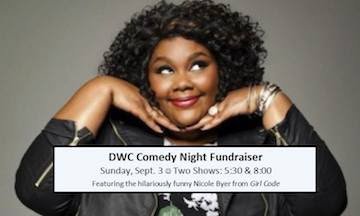 Join us as we welcome Nicole Byer to The Comedy Attic for a fun night to help raise funds for the Democratic Women’s Caucus. Other local female comedians will also perform. A fan favorite on MTV’s Girl Code, Nicole is quickly becoming one of the most sought after young comedians and actors in the comedy world. As producer and star of the scripted MTV comedy series "Loosely Exactly Nicole," she will make history when the show becomes the first ever content exclusive to Facebook.To purchase tickets, go HERE. 100% of the ticket price benefits the DWC! Contact Amy Swain if you'd like to be a sponsor for this event! [email protected] More information? Just email [email protected] and check out our Facebook Events Page.ALSO IN THIS ISSUE:AnnouncementsEventsCartoonAction Item

Monroe County Democratic Party Creates DEMOCRACY LABThe 2016 election made one thing clear: to be successful in future elections and in promoting the progressive agenda, the Democratic Party must develop stronger relationships, build trust, and learn from and support progressive groups that are working toward shared goals.  To that end MCDP is launching Democracy Lab.Democracy Lab is an incubator space for affinity groups modeled after business incubators for start-ups. Participating organizations have access to a large conference room, several co-working desks, a multimedia support room, office amenities, and advice and guidance from staff experienced in organizing advocacy, change, and impact. MCDP hopes that this space will create an area of cross-fertilization for the best and most effective ideas and practices. Participating in Democracy Lab does not involve any affiliation with the Democratic Party, but only renting space and services to help accomplish your group’s goals.Basic Democracy Lab membership is $75 per month. Mayor John Hamilton strongly supports this effort and will subsidize $50 of the $75 cost per month for the first 10 accepted groups through at least 2018. Sign up today! For more details, contact us at [email protected] or click here for more information.Women's Equality Day is Saturday, August 26. According to the National Women's History Project, the date for Women's Equality Day "was selected to commemorate the 1920 certification of the 19th Amendment to the Constitution, granting women the right to vote. This was the culmination of a massive, peaceful civil rights movement by women that had its formal beginnings in 1848 at the world’s first women’s rights convention, in Seneca Falls, New York."Visit the NWHP Women's Equality Day web site for more information on the day and ways to celebrate.
EVENTS:

Friday, August 18th, 12 pmMonroe County Domestic Violence Coalition MeetingMcCloskey Room, City Hall
Join the Monroe County Domestic Violence Coalition at its monthly meeting to hear guest speaker, Kirat Sandhu, Training Coordinator for the Indiana Coalition to End Sexual Assault. Kirat Sandhu has been with the Indiana Coalition to End Sexual Assault (ICESA) for just over a year, and she currently serves as Training Coordinator for the statewide organization. Kirat graduated with bachelors degrees in Philanthropic Studies and Women's & Gender Studies from Indiana University-Purdue University Indianapolis, and she is currently pursuing her JD at the IU Robert H. McKinney School of Law. Kirat is passionate about addressing root causes and utilizing feminist methodologies to better understand and end gender-based violence; she is extremely involved with the It's On us campaign launched out of the White House in 2014, and her work in sexual violence prevention has been recognized by former Vice President Biden.
Monday August 21, 5:30pmDemocratic Party Caucus for City Council At-Large SeatCity Council Chambers, City HallThe Monroe County Democratic Party will hold a caucus to fill the at-large seat that Tim Mayer is leaving behind after 34 years of tremendous service. Anyone is invited to watch the proceedings, but only precinct chairs (or their proxies) can ask questions of the candidates and vote.   Additionally, the MCDP has been hosting events over the course of the month to give the candidates an opportunity to meet the voting precinct chairs and to give all of us a voice as part of the process. The final event was the DWC-hosted event yesterday.The last day to file for this seat is August 18th at 5:30pm. The MCDP encourages anyone who wants to run to do so and will give them the tools and guidance they need to make this a productive experience. If you’re interested in running, email MCDP Chair Mark Fraley for more information and next steps.Aug. 24-27, 2017137th Annual IDEA ConventionFrench Lick Hotel & Resort, French Lick, Indiana
for details: http://www.indems.org/annual-idea-convention-in-french-lick/Saturday, August 26, 6:00 pmLee Hamilton Dinner8670 West Highway, French Lick, IndianaJoin your fellow Ninth District Democrats for the annual dinner fundraiser and candidate showcase named in honor of our former Ninth District congressman Lee Hamilton, to be held as part of the annual Indiana Democratic Editorial Association (IDEA) conference in historic French Lick. Keynote Speaker: former US Senator Mark Begich (D) Alaska. At the dinner, Judy O'Bannon, Indiana's former First Lady, will be honored with the Lee H. Hamilton Public Service Award, which was established to recognize individuals who make a significant and lasting contribution to public service and our party. Many of us are familiar with Judy's political service (First Lady, Indiana Co-Chair for Hillary Clinton's 2008 Presidential campaign, campaign surrogate, party fundraiser). But Judy has also led initiatives in community development, historic preservation, education, and the arts.  In November of 2016 she was honored by the Indiana Association for Community Economic Development for "a lifetime of moving communities forward."  Her commitment has built the foundation for community growth across Indiana. For more information, contact District Party Headquarters at 812.725.2020 or [email protected].$50 per person, $40 for Ninth District Torchbearers To purchase tickets, click here!Saturday, August 26, 3:00 - 11:00 pm2017 PridefestKirkwood AvenueBloomington Pride-sponsored Summerfest, Bloomington's annual celebration of LGBTQ+ life and culture, now has a new name: Pridefest. This year's festival takes place August 26 on Kirkwood Ave (between Walnut & Lincoln Streets). We'll have live performers, music, family-friendly activities, educational booths, and local food trucks. Performers: Interested in joining us? Visit our website to submit an application. Local and regional acts preferred. Information at http://bloomingtonpride.org/pridefestThursday September 7th 5 pm-7 pmTour the Bloomington Health Center! (tours starting at 5:15, 5:45, and 6:15)421 S College Ave, Bloomington, IN 47403Deborah Meader and Nan McKinley (Co-chairs of the Reproductive Justice Task Force of the UU) along with Planned Parenthood of Indiana and Kentucky (PPINK), invite you to tour the Bloomington Health Center and learn about the organization and services provided.Reservations are required. Please RSVP by September 1, 2017 to Alayna Lerner at [email protected] or 317-637-4170. PPINK appreciates your support and hopes to see you there! Sunday, September 10  4:00-7:00pmThe Third Annual Hamilton Friends & Family PicnicBryan ParkSave the date, more details to come...Thursday, September 28, 9:00 amFirst Annual Monroe County Government Opioid and Prescription Drug SummitMonroe County Convention CenterCommissioner Amanda Barge, Councilwoman Shelli Yoder and Monroe County Government officials are teaming up to provide leadership on this issue for this region. This event is for anyone who has an interest in this issue and being part of the solution. CEU's will be offered.Tickets are going fast, so reserve yours now: click here for ticketsIf your organization wants to sponsor this event, please email Shelli at: [email protected]If you are interested in presenting at the event, or having a booth, please email Amanda at: [email protected]

ONE ACTION ITEM: Buy tickets and invite all your friends to the DWC COMEDY FUNDRAISER on Sunday, Sept. 3 at the Comedy Attic
All the proceeds will help fund, inspire, recruit, support and train progressive, pro-choice women candidates. We promise we will make you laugh!!

Join the DWC.  Renew your membership today. The DWC is dedicated to inspiring, recruiting, training, supporting and funding women to increase the number of progressive, pro-choice women in the political arena. We ALL help with this mission, together, collectively. Make sure you have full rights and privileges of membership.     Only $20 for one year’s membership.  Join online here: https://democraticwomenscaucus.nationbuilder.com/membership

Do you have news items? Send your items of interest to us at [email protected]
Deadline for MMN is noon on Sunday.Paid for by DWPAC - Democratic Women's Political Action CommitteeDemocratic Women's Caucushttp://www.democraticwomenscaucus.org/