Congratulations to newly sworn elected officials supported by the DWC. Pictures from the January 1 ceremony can be found on our Facebook Page!

Our constitutional democracy demands our participation,
not just every four years but all the time.
— Hillary Clinton, November 9, 2016

Keeping in tune with the above statement, our breakfast meeting on Friday, January 6th, (7:30 am at the Village Deli) will focus on just how we can participate, communicate, and advocate!  Folks who have resources for local, state, and national issues and actions will be presenting concrete things we can do right now, some from the comfort of our homes, to help monitor, inform, act and resist if necessary. If you've been bombarded with items on Facebook, locally, through friends and moms' groups... come to breakfast to help sort out some of the most effective and meaningful ways to participate in our democracy. (And check out the two - city and county - calls for Board and Commission members below!) 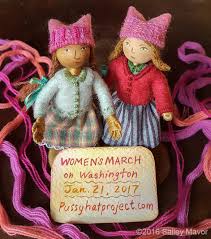 http://www.berkeleyside.com/2016/12/29/thousands-of-women-knit-pink-pussy-hats-to-wear-at-trump-protest-marches/
#pussyhat
Yeah, it might be a little silly....  but it can be SO much more than that!
It's public art.
It's a rallying cry.
It identifies friends in a sea of people.
It does GOOD!
Local women are knitting, crocheting or sewing fleece hats to benefit Planned Parenthood! They'll be sold to marchers for a $20 donation to Planned Parenthood! Stay tuned for more info on the local hat project!
If you can create one of these hats this week, bring it to the breakfast meeting on Friday.  Email [email protected] for information.

*****JUST IN! Yarns Unlimited, the downtown local yarn store, will be having a knit-in on MLK Day (January 16th) from 1-4 pm to make these hats. Check out their Facebook page for more details! *****

City of Bloomington Seeks Applicants for New Parking Commission
The Bloomington Office of the City Clerk is now accepting applications to fill positions on the recently-created Parking Commission. Application review will begin immediately and will continue until the positions are filled.
Seven seats are open to Bloomington residents, with varying membership requirements for each seat. Seats are available for residents living within City limits, residents and merchants of the downtown metered zone, residents of a neighborhood parking zone, and a board member or employee of a non-profit organization operating in the downtown metered zone.
To learn more about the Parking Commission or for online applications, go to the online City system for board and commission information known as “OnBoard” at https://bloomington.in.gov/onboard/committees. Information and applications are also available at the City Clerk’s Office in Showers City Hall at 401 N. Morton.

City Commission on the Status of Women Seeks Nominations for Yearly Awards
The City of Bloomington Commission on the Status of Women is seeking nominees for the Woman of the Year, Emerging Leader and Lifetime Contribution Awards. The deadline for submission of nominations is January 23, 2017. The awards will be presented during Women’s History Month, March, 2017.
The Woman of the Year Award is presented to a woman who has improved the quality of life for other women through inspiration, community service or professional accomplishments above and/or outside normal job responsibilities. The recipient is also someone who serves as a positive role model for girls and women and has made outstanding contributions to the community. The Lifetime Contribution Award recognizes a woman whose work has significantly advanced the status of women through leadership and service. The Emerging Leader Award acknowledges a woman with a relatively short (less than five years) history of significant achievements and recognizes the potential for future contributions.
Nomination forms are available in the City of Bloomington’s Community and Family Resources Department, City Hall Suite 260 and online at https://bloomington.in.gov/csw, or contact Sue Owens at [email protected].  Nominations should include the name, address, telephone number and email address of the nominee in addition to the reasons why the nominee merits the award and how her community service has benefited women.  The nominator also should include his or her name, address, telephone number and email address. Send completed nomination forms by email to [email protected] or by mail to: The Commission on the Status of Women, P.O. Box 100, Bloomington, Ind. 47402
The Emerging Leader Award recipient will be honored at the Women’s Leadership Development event in March, 2017 at City Hall. The Woman of the Year and the Lifetime Contribution Award recipients will be honored at the Women's History Lunch on Wednesday, March 22, 2017 at the Convention Center.

City of Bloomington Seeks Board and Commission Applicants
Several current terms expire in January 2017.  If you reside within the city limits and are interested in contributing to one of the 48 boards and commissions the City relies on for guidance, please consider submitting an application.
To learn more about each board and commission, including mission statements, membership requirements, current membership listings and term lengths, or for online applications, go to the online City system for board and commission information known as “OnBoard” at bloomington.in.gov/onboard, or by clicking on the “OnBoard” button on the City’s home web page at bloomington.in.gov.
All board and commission meetings are free and open to the public. Potential applicants are urged to attend a meeting of their desired board or commission prior to applying.  Meeting schedules and locations can be found under the “committee” tab on OnBoard.
Monroe County Seeks Board and Commission Applicants
There are a number of appointments for Monroe County Boards and Commissions that are up for renewal (December / January).
Service on county boards and commissions is a fantastic way to get involved with local government. To apply for one (or more!) Board or Commission, follow the link from the co.monroe.in.us home page.  For links to each Board and Commission, please visit:
http://www.co.monroe.in.us/tsd/Government/Commissioners/MonroeCountyBoardsandCommissions.aspx  Or you may contact Julie Thomas at [email protected] for additional information.

Webinar opportunity -- Advocacy 101: the Power of Story and Relationship
January 3, Tuesday, 7:00 to 8:30 pm.
Lisa Marchal--Indy LWV member and Sr. Global Grassroots Associate of RESULTS--is offering a 90-minute webinar on January 3 from 7 to 8:30p.m. (EST) called Advocacy 101: The Power of Story & Relationship.
She is requesting a $5 donation to RESULTS  and you can sign up with a credit card at https://secure.results.org/advocacywebinar
This webinar is open to everyone. It is not an LWV-sponsored training and will focus more broadly on advocacy techniques and strategies everyday citizens can use to improve their communities.

HIDDEN FIGURES film opening on Friday, January 6th
Hidden Figures is the incredible untold story of Katherine Johnson (Taraji P. Henson), Dorothy Vaughan (Octavia Spencer) and Mary Jackson (Janelle Monae)—brilliant African-American women working at NASA, who served as the brains behind one of the greatest operations in history: the launch of astronaut John Glenn into orbit, a stunning achievement that restored the nation’s confidence, turned around the Space Race, and galvanized the world. The visionary trio crossed all gender and race lines to inspire generations to dream big. This will be at the Westside Showplace.

Legislative Update this Saturday!
January 7, Saturday, 9:30 am to 11:00 am. Council Chambers at City Hall, 401 N Morton
State Legislators representing Monroe County and the area are invited by the League of Women Voters to share their ideas for this legislative session. Legislators will share information on bills they have submitted for this session, will give their ideas on how the session will proceed, and will take questions from the audience. This is an opportunity that is essential to understanding just what happens during the general assembly session. Plan on going!

The Watson's go to Birmingham film and dialogue.
January 15, 2 pm to 4:30 pm. Buskirk Chumley Theater.
Join The Project School & Bloomington United for a free public screening of the film, "The Watsons Go to Birmingham." Based on the novel of the same title, the film tells the story of an African American family from Flint, Michigan who travel to Alabama in 1963 and are confronted by the realities of the Jim Crow South. Learn about the story: https://en.wikipedia.org/wiki/The_Watsons_Go_to_Birmingham_–_1963.
Following the film screening, The Project School, Bloomington United & community guests will lead a dialogue on the Civil Rights Movement & the legacy of Dr. King.
Because of mature themes, this film is described as being for ages 9+. However, families may also find it appropriate for younger children.

Indianapolis, IN
Saturday, January 21, 2017,
For a ride on the bus from Bloomington to Indy contact Deborah Meader [email protected] asap!

Washington, DC
Saturday, January 21, 2017, Lincoln Memorial, Washington, D.C.
Join hundreds of thousands of women in a March on Washington to show our support for women everywhere and highlight issues of sexual assault, workplace discrimination, and women's equality. We need to let the new administration know that we are here, that we are watching and that we will take action!
There is a bus from Bloomington! Use this link, add your city and state.
http://rallybus.net/womens-march-on-washington

BOOK DISCUSSION
Read: Ratf**ked: The True Story Behind the Secret Plan to Steal America's Democracy by David Daley is recommended by both Sheila Kennedy and Kate Cruikshank as a must read.  It covers how the GOP came up with the plan to control the state legislatures that, in turn, controlled the redistricting of congressional and state legislative districts that led to their performance on 11/8/16.  And this plan started the day after Barack Obama was elected in 2008.  If  you'd be interested in meeting with other women to discuss the book, please let us know on our Facebook page, or email [email protected] Several folks have already said they are interested!
and last, but NOT least:

Join the DWC in 2017. It's important to stay organized and energized! Renew your membership today!
The DWC is dedicated to inspiring, recruiting, training, supporting and funding women to increase the number of progressive, pro-choice women in the political arena. We ALL help with this mission, together, collectively. Make sure you have full rights and privileges of membership!
Only $20 for one year’s membership.  Join online here: https://democraticwomenscaucus.nationbuilder.com/membership